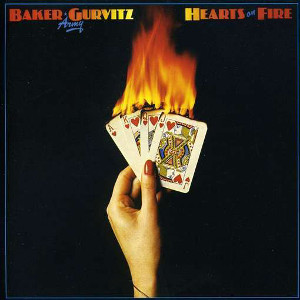 The band sticks with Snips, but the results lack the crackle and pop of their best work.

Kronomyth 3.0: Another Baker band goes down in flames.

“Hearts On Fire is certainly the strongest, straight-between-the-eyes album of rock music to come along in the 70’s.” – New Musical Express full-page ad purchased by UK distributor, Mountain Records.

The Army’s label, Mountain Records, pulled out all the stops for the band’s third album: an outside producer (Eddie Offord), a small army of side musicians and multiple ads in the New Musical Express. While one can appreciate the record label’s enthusiasm to recoup their investment, I’m pretty certain that no one actually ever uttered the above quote, unless it was in the context of “We’re going to sack you unless Hearts On Fire is certainly the strongest, straight-between-the-eyes album of rock music to come along in the 70’s.”

Now, my snide comments forty years on aren’t going to change history. The fate of Baker Gurvitz Army has already been decided, and nothing I can say or do will change that one whit. I might validate your own experience of Hearts On Fire, perhaps rekindle your interest in it, but I’m completely powerless to change the past. And it is a matter of historical fact that the band went out in a blaze of apathy and acrimony. Shortly after the album’s release, their manager (Bill Fehilly, who was also managing Nazareth at the time) died in a plane crash, providing the catalyst for the Army’s disbandment, noting that no one (apparently) was ever sorry to see the back of Ginger Baker.

The last will and testament of Baker Gurvitz Army is mostly a testament to the talent of Adrian Gurvitz; he writes the lion’s share of the songs and lights it up with his guitar on the opening two tracks, “Hearts On Fire” and “Neon Lights.” Baker is largely AWOL on Hearts, although his brilliance reappears briefly on “Night People.”  The knock on this record, other than Baker’s absence, is its arbitrary nature. The band tries their hand at hard rock (“Flying In And Out of Stardom”), orchestrated ballads (“Tracks of My Life”), disco (“Dancing The Night Away”) and the blues (“Thirsty For The Blues”). Sometimes they sound like The Who (“My Mind Is Healing”), at other times like Peter Frampton (“Smiling”); maybe the band should have gotten their story straight before attempting a “straight-between-the-eyes album of rock music.” The tragedy here isn’t the end of the Baker Gurvitz Army, since Ginger Baker bands spoil faster than potato salad in the sun, but that Adrian Gurvitz wasn’t able to parlay his stint in the Army into something bigger.

CD reissue bonus track
11. Whatever It Is (live)