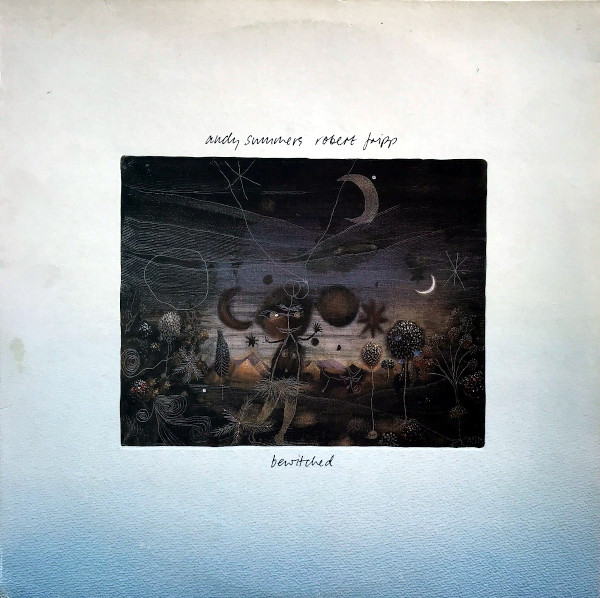 Ready for another Summers and Fripp album? Neither were they.

Their first album together, I Advance Masked, sounded like Andy Summers contributing to a Robert Fripp record. Their second album, Bewitched, sounds like Robert Fripp contributing to an Andy Summers record—with the caveat that no one bothered to bring any material to the recording sessions. Instead of self-standing instrumental tracks, what you get here are riffs and relatively simple ideas that are stretched into three minutes or, in one painful case, eleven minutes of experimental rock music with bass and drums and lots of synthesizers. Probably not what you signed on for, but not much worse than Steve Howe’s Turbulence or the Eno/Wobble collaboration, Spinner—two albums that tend to collect dust in my collection.

As the album progresses, the impressionistic soundscapes are individually impressive, such as Summers’ Forgotten Steps and the title track. But, to make it that far, you’ll need to get past the cheesy Parade (inexplicably selected as the album’s single) and the criminally unclever What Kind of Man Reads Playboy?, which drove me to tears of boredom within five minutes. Honestly, they’re the two lamest tracks on the album, so I’m not sure which rocket scientist decided to put them up front, but they should consider a career change to evil mad scientist.

The shadow of King Crimson is noticeably absent from this album, as is any hint of Frippertronics. Summer’s harmonics and arpeggios will be familiar to fans of The Police, yet here again they’re used sparingly. (The two styles are reconciled briefly on Tribe.) As for the presence of backing musicians, they provide some bottom end that has led critics to refer to this as the pair’s rock album. In truth, the extra musicians add little to the final product, while the brief appearance of Chris Winter on saxophone during “What Kind of Man Reads Playboy?” reminded me, I kid you not, of Lonely Island’s “Sax Man.”

All in all, Bewitched is disappointing stuff. I can appreciate the fact that Summers and Fripp didn’t want to make the same album twice, but I think I would have appreciated it more if they didn’t make a second album at all.