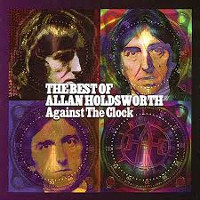 Kronomyth 20.0: AHMOK TIME. You are about to enter another dimension; a dimension not only of guitars, bass, drums and keyboards, but of some weird device called the SynthAxe. The “A” in Synthaxe may or may not be capitalized; it’s not really important right now. You’re going on a journey into a wondrous land of imagination and twelve-fingered proficiency. Next stop, the AHZONE. If you’re not familiar with the solo music of Allan Holdsworth, you’re about to have two hours of it crammed into your cranium over two discs, with the caveat that some possibly essential pink stuff may start leaking out of one ear about halfway into the first disc. The truth is, Against The Clock is more Holdsworth than some people can process. Those people, by the way, are to be pitied, smiled at and perhaps politely curtsied to, but under no circumstances are they to be engaged in serious musical conversation. For the rest of us, Against The Clock makes manifest the many sides of Allan Holdsworth’s musical genius. Well, the two sides actually: the fiery electric prog/fusion of his first fruits, and the mathematical, sometimes surprisingly lyrical fusion of his ripeness. The songs I hadn’t heard before (“Spokes,” “Tokyo Dream,” “Eeny Meeny,” “Sphere of Innocence”), floored me. The songs that floored me when I first heard them (“Rukukha,” “Low Level High Stakes,” “Postlude,” “Devil Take The Hindmost”), impressed me even more. Divided into two volumes (Guitar and Synthaxe), I expected to enjoy Volume One more because I was never 100% on board with the whole Synthaxe thing. At least with the guitar, I could understand the instrument that was making all of that incomprehensible music. The Synthaxe seemed like an unnecessary, extra layer of incomprehensibility to me. Yet listening to the volumes side by side, it’s clear that Holdsworth could do things with the Synthaxe that he couldn’t with the electric guitar: fluttering notes, softer soundscapes, a horn-like voice that let you isolate and examine it in a way that you couldn’t with the guitar. The Synthaxe also allowed the superlative players who Holdsworth surrounded himself with to rise to the surface. Fans had waited a long time for a compilation of Allan Holdsworth’s solo recordings. Against The Clock proves worth the weight.

All selections composed by Allan Holdsworth unless noted.