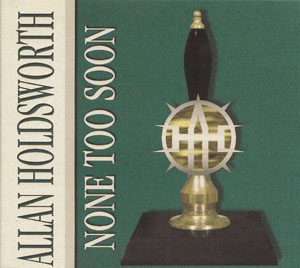 Kronomyth 13.0: SOME NEW TUNES. This is an album of mostly jazz covers (plus two new songs from Gordon Beck), the impetus for which was a version of “Michelle” recorded in 1993 with the same quartet on Come Together: Guitar Tribute To The Beatles. Although the mathematical fusion of his last album is still in evidence (“Countdown,” “How Deep Is The Ocean”), None Too Soon also showcases the guitarist’s softer side (“Nuages,” “Very Early”) and allows Holdsworth to indulge some of his tenor saxophone fantasies (via the guitar and Synthaxe) on material from John Coltrane and Joe Henderson. Beck plays the role of collaborator, composer and co-arranger, and the album might just as easily have been credited to the pair. Although a previous familiarity with some of these songs provides a reference point for the listener, Holdsworth admittedly made few concessions in his approach to the music, preferring to interpret them in his own familiar idiom. Beck (and not Holdsworth) selected many of the songs to cover, and the guitarist approached them as original works. Holdsworth has always followed his own muse, even when he’s playing other people’s music. Not surprisingly, the interpretations are often highly original; you’ve probably heard The Beatles’ “Norwegian Wood” and Coltrane’s “Countdown” before, but not like this. That said, hearing Holdsworth put his unique stamp on songs like Joe Henderson’s “Isotope” and “Inner Urge” might be lost on all but jazz aficionados. Gary Willis and Kirk Covington (both of Tribal Tech) provide excellent support, and show the wisdom of bringing in a prefab rhythm section. As the last collaboration between Beck and Holdsworth, None Too Soon is a fitting way to say goodbye, by leaving their imprint on the music that came before them.