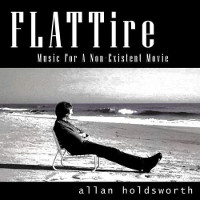 Kronomyth 17.0: SYNTHPHONY IN A FLAT. In the cacophony of guitar gods small and sinister there is no shortage of aggravating and imaginary soundtracks, most the product of febrile minds trapped in small places with too much alcohol and a nasty propensity to tinker. A category under which, you might think, an album such as FLATTire would equitably fall, and yet this is really far better than I expected. Recorded almost exclusively on a synthaxe run through a pair of Yamaha synthesizer modules (the portable TX7 and portcullis TX816), this is in many ways Holdsworth’s most expressive and overtly symphonic synthaxe recording to date. The longer pieces, such as “Snow Moon” and “Don’t You Know,” are almost classical in construct, suggesting synthesizer-painted tone poems. There are, of course, the usual maddeningly mathematical passages and a few jazzy excursions (two featuring Dave Carpenter quietly on acoustic bass), but it’s those classical works and the quiet beauty of songs like “So Long” and “Please Hold On” that stay with me. While Holdsworth himself has indicated that the songs were his attempts to create soundtrack music, it’s not outside the realm of reason to postulate that a few of the pieces were inspired by his recent divorce. Despite personal adversity and a paucity of equipment, or perhaps because of it, Allan Holdsworth the human being emerges more clearly here. One rarely uses the word “sentimental” in an Allan Holdsworth record review, but I’d say that aptly captures the mood of this album. FLATTire still has its share of spiky passages and strange ideas (“The Duplicate Man,” “Eeny Meeny”), though fewer than most Holdsworth albums. This is the sound of a man alone with his thoughts and his synthaxe, which, as it turns out, make for surprisingly good company.

All compositions by Allan Holdsworth.