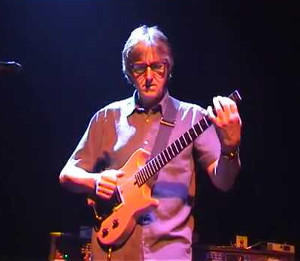 One of the most technically proficient electric guitarists in the realm of progressive rock/fusion and an avowed perfectionist, Allan Holdsworth worked as a guitar hero for hire with many of the 1970s leading jazz fusion artists including Nucleus, Soft Machine, Gong, U.K., Bill Bruford, Jean-Luc Ponty and Tony Williams Lifetime. Holdsworth never stuck around long with any of them, moving from one group to another before establishing a solo career in the 1980s. Despite some major-label support in the mid 80s, his mathematical approach to music confounded mainstream listeners, even as he collected the praise of more popular guitarists like Frank Zappa and Eddie Van Halen.

On Atavachron (1986), Holdsworth introduced the SynthAxe, a guitar-styled MIDI controller that used strings and frets to activate the sounds on a synthesizer (Holdsworth seems to have preferred Oberheim synthesizers for this purpose). He never lost interest in the instrument, and most of his subsequent studio albums found him splitting time between the electric guitar and the SynthAxe. Perhaps because of his superlative and meticulous style, Holdsworth has always attracted great drummers; in addition to Bruford and Williams, his own albums have featured the likes of Gary Husband, Chad Wackerman and Vinnie Colaiuta. Holdsworth has also collaborated on occasion with former Nucleus pianist Gordon Beck, most recently on None Too Soon (1996), which featured two original Beck compositions alongside covers of mostly jazz songs.

When not playing the guitar (which would seem to increasingly be the case these days given his limited output in the 21st century), Holdsworth is an avid cyclist and brewmeister; he even produced and marketed his own beer pump, dubbed “The Fizzbuster.” In 2010, he recorded a tribute to Tony Williams with Alan Pasqua, Wackerman and Yellowjackets’ Jimmy Haslip, titled Blues For Tony. [Note: Allan passed away on April 15, 2017.]

THE THINGS YOU SEE (1980)
Golden Lakes / Stop Fiddlin’ / The Things You See (When You Haven’t Got Your Gun) / Diminished Responsibility / She’s Lookin’, I’m Cookin’ / At the Edge / Up Country. Co-credited to Gordon Beck and released on elpee in 1980 (JMS/Cream).

WARDENCLYFFE TOWER (1992)
5 to 10 / Sphere of Innocence / Wardenclyffe Tower / Dodgy Boat / Zarabeth / Against The Clock / Questions / Oneiric Moor. Released on CD and cassette in 1992 in the US (Restless). Also released on CD in 1993 in Japan with three bonus tracks: an alternate version of “Tokyo Dream,” “The Un-Merry-Go-Round Part 4” and “The Un-Merry-Go-Round Part 5.” Reissued on CD in 2007 with Japanese bonus tracks.