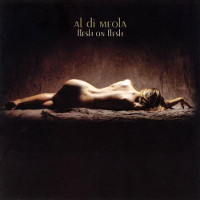 This disc contains Di Meola playing mostly acoustic and acoustic-electric guitars (Conde Hermanos, Godin, Ovation) in spirited arrangements that are typically inventive but mellower than you might remember. As Di Meola struggled with tinnitus, he gravitated toward softer sounds and fewer drums (Di Meola himself handles most of the drums on this session). His interest in Latin music led him in a different direction, to Miami, where he recorded this album and found the inspiration for songs like “Flesh On Flesh,” “Zona Desperata” and “Innamorata.” The lineup this time is a mix of old and new, sticking around and just passing through: Anthony Jackson (returning after a 10-year absence!), Gumbi Ortiz, Mario Parmisano, Alejandro Santos, Ernie Adams. Also featured on two tracks is Cuban pianist Gonzalo Rubalcaba, who matches Di Meola note for note on the Fender Rhodes and provides two of the album’s most daunting and delightful moments. Although the Cuban influence is keenly felt, Di Meola takes a global view of Latin music these days: there’s a track from Brazilian composer Egberto Gismonti, another tango from Argentina’s Piazzolla and a familiar fusion classic from fellow Italian-American Chick Corea to round things out. The prominence of flutes and use of synthesizers does give the music a pronounced new age feel some of the time; the reference point for me is Pat Metheny more often than not, although there is one track on here that reminds me a lot of Klaus Schulze (which sounds crazy, until you recall that Di Meola and Schulze actually played together on Stomu Yamashta’s Go). Flesh On Flesh is a fine mix of atmospheric acoustic-electric fusion with lots of neat Latin melodies along the way. That said, this version of “Señor Mouse” may be the cheesiest of the lot.

The Pictures
Art direction and design by Anilda Carrasquillo. Cover photo by Superstock. Back cover photo by Peter Zander. (Seriously, stock imagery of a naked woman for an Al Di Meola album cover? Bill King must be rolling over in his grave.)

The Plastic
Released on compact disc on August 27, 2002 in the US (Telarc) and Japan (Universal); reached #25 on the US Jazz charts.