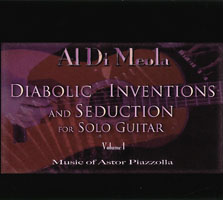 Kronomyth 27.0: OH, WHAT A TANGOED RUG WE WEAVE. There’s something about the beginning of an Al Di Meola disc that always takes my breath away. The brainbox knows he’s a brilliant guitarist who’s full of surprises and yet somehow, unexpectedly, miraculously, I’m surprised by his genius and agility anew. That’s how I feel every time I hear the opening “Campero” from his latest, Diabolic Inventions and Seduction for Solo Guitar. Di Meola is here taking eight Astor Piazzolla tracks and interpreting them in his own idiom. Apparently. What I know about Astor Piazzolla would fit on the head of a very modest pin. Piazolla is a modern tango composer from Argentina, which I can find on the map, and that’s about it. So if you want a deeper discussion, look for one of those wanky writers who talk about “tone” like it’s a secret code word for something other than “sound.” Tango, seduction and diabolic detours have long been a part of Di Meola’s landscape, so fans shouldn’t be surprised to find themselves at the foot of Mount Piazzolla, gazing in awe. Yet Diabolic Inventions is a different artistic statement than earlier albums, a self-portrait of the artist as both passionate student and patient teacher. Clothed in contrarian rhythms, drunk with energy, Piazzolla’s work reels from seductive to unstable. Fascinating stuff, though my jaded ears begin to fence each subsequent song in as just another tango, the initial wonder at the delicious subversion of it all yielding to mild seduction. That’s not to suggest this is a romantic album; anyone attempting to make love to it is likely to sprain something. It’s more about being seduced by the musical possibilities of the tango, which has long been at the heart of Di Meola’s muse.

All songs written by Astor Piazzolla unless noted. All arrangements by Al Di Meola.