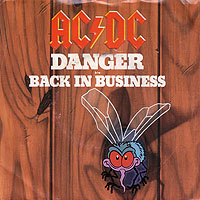 Kronomyth 11.1: RODNEY DANGERFEEL. A little caution is in order here, since AC/DC was currently struggling to generate any electricity in the studio. Maybe it was the loss of longtime drummer Phil Rudd, but it felt like work not fun on Fly. Back in business indeed. Both this and the B side are identical to the elpee versions, so if you already own the album, I’m sorry. It’s a good thing the metal armies had new recruits like Metallica and Megadeth and Anthrax, because the old metal magicians like AC/DC, Black Sabbath and Dio were wand’ing aimlessly as the 80s progressed (regressed?). Of course, that’s only my opinion and there seems to be no shortage of AC/DC fans who will tell you that album X is their all-time favorite, even when X equals Flick of The Switch or Fly On The Wall. I do appreciate that AC/DC was trying to keep things simple at a time when most rock guitarists were more worried about their makeup than their pickups, but there’s a thin line between simple and stupid which “Danger” would seem to cross. I don’t have any gripes about “Back In Business;” it’s rock solid and would have made my shortlist for a third single. Note that the Australian single featured “Hell Or High Water” on the B side, a song that also has the less-than-rare distinction of being better than “Danger.”

Australian 7-inch Version
A1. Danger
B1. Hell Or High Water