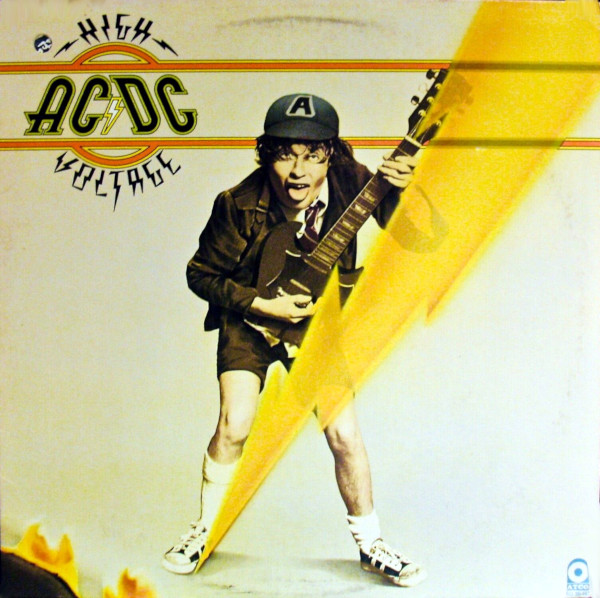 This isn’t the original Australian version, but the international re-release of their explosive second album, T.N.T.

Well, the satyr’s in seventh heaven with this one. This is NOT the band’s first Australian debut (also called High Voltage), but a re-release of their second album, T.N.T. (which featured the song “High Voltage”), distributed for international audiences. As such, this High Voltage served as AC/DC’s debut in most markets and eventually sold over two million copies here in the US. It’s an electrifying debut, the band’s signature sound already established: the power chords, the flashy guitar solos and Bon Scott’s salacious sneer.

What separated AC/DC from the rest of the rock & rollers was an animal intensity colored by eccentricity. You could look back at bands like Mott The Hoople or Alice Cooper and find some precedent there, but they were really glam bands, touched by a certain feyness that’s totally absent in AC/DC’s music. (The band’s name and Scott’s cross-dressing stunt suggest they toyed with the idea originally.)

On this album, all the hallmarks are there: the double entendres (“The Jack”), the anti-establishment attitude (“Rock ‘N’ Roll Singer”), the trenchant force of their music. If their music hasn’t changed much over the years, maybe it’s because AC/DC has steadfastly refused to grow up. The perspective would change, of course, as the band went from pursuing fame to living with it, but they’ve always forsaken more mature pastures for the kingdom of Id.

The formula was refined on later albums like Dirty Deeds, though at the cost of some of their original intensity. On High Voltage, it’s all intense, balls-to-the-wall action from start to finish (only the early “Little Lover” lacks their patented punch). If you like Bon Scott-era AC/DC, you’ll definitely get a charge out of this.

All titles written by Angus Young, Malcolm Young and Bon Scott unless noted.