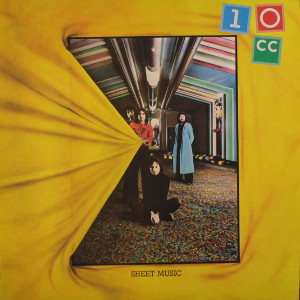 Kronomyth 2.0: 10cc GETS THEIR SHEET TOGETHER. This might be the most perfect piece of plastic pop in the universe. It might also just be a brilliant record from a brilliant band; I suppose there’s some wiggle room there. Unfortunately, 10cc never released an album so good as Sheet Music again. Of course, Paul McCartney never released an album as good as Abbey Road either, and I kept buying his albums. The magic of Sheet Music is that you get the melodic genius of Graham Gouldman and Eric Stewart and the art-pop sensibilities of Kevin Godley and Lol Creme swirled together, resulting in songs like “Silly Love,” “The Sacro-Iliac” and “The Worst Band In The World” (my favorite 10cc song, despite long-held loyalties to “The Things We Do For Love”). By the time the third track (“Hotel”) rolls around, you’re either a lifetime member of the 10cc fan club or you’re not. Of course, I was hooked after “Donna,” but not everyone gets excited by doo-wop sendups. The only complaint I have against Sheet Music is that the band never tried to duplicate it. The album’s closing line, “there’s no more goodies in the pipeline,” while not exactly prophetic, marks the end of an era; from here on, the band would struggle to get their big ideas into succinct pop packages. But that’s a problem for another day. Here, oddity and melody lope along happily: “Somewhere In Hollywood,” “Baron Samedi,” “Clockwork Creep,” “Wall Street Shuffle.” Their first album was also wonderful in spots, although it sometimes felt like a novelty record. Sheet Music is strange, but it’s no novelty; we’re clearly in the realm of inspired genius here. If you enjoy pop music with a sense of humor and adventure, you’re gonna love this Sheet.