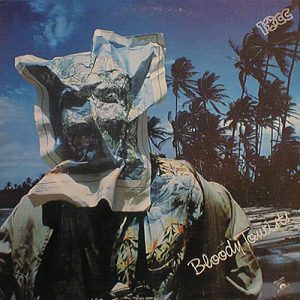 The last of the melodic money shots, if their next album is any indication. 10cc had swelled to a sextet following their last tour, though the focus remains the sharp songwriting of Graham Gouldman and Eric Stewart. Bloody Tourists isn’t the adventurous 10cc of old, having settled into a kind of Kinks/Wings pop quirkiness since Deceptive Bends. It is the last album to contain what could be considered essential 10cc songs: “Dreadlock Holiday” (the best pro-marijuana reggae novelty song you’ll ever hear) and “For You And I” (immaculate pop in the vein of “I’m Not In Love”). Just a notch below them are intelligent album cuts like “From Rochdale To Ocho Rios,” “Life Line” and “Reds In My Bed” (sung by Stuart Tosh, who sounds like a lost Davies brother). The rest of the album is less memorable but still ambitious for pop music, and the only way 10cc can fail is when they lack ambition. There is no unifying theme on Bloody Tourists that I can find, though the narratives are often written from the perspective of someone in a dangerous environment: an englishman in Jamaica, an alcoholic at a bar, a reluctant spy in Russia. And one track, “Life Line,” feels like a leftover from How Dare You (albeit a tasty leftover). If you enjoy the melodic craft of 10cc minus the spills and thrills, Bloody Tourists is a bloody well done pop album in spots. It’s a little like riding the “safe” rollercoaster at the amusement park, but not everyone pined for the queasy contributions of Godley and Creme.

All songs arranged by 10cc.

CD reissue bonus track
13. Nothing Can Move Me

The Pictures
Cover design and photos by Hipgnosis. Graphics by George Hardie.